Molecular biology and enzymology of genetic recombination and DNA repair

Cellular replication is rarely completed unimpeded from initiation to termination. Barriers to replisome progress abound in the form of DNA lesions, strand breaks, or bound proteins – each presenting a unique bypass challenge. A constellation of specialized enzymatic activities escort replisomes past bound proteins or transcription complexes, reconstruct broken forks after encounters with template strand breaks, reinstall active replisomes on the reconstructed forks, and transiently regress stalled forks to allow repair of downstream DNA lesions. Much of the genome instability associated with cancer can be traced to missteps at the critical interfaces between replication, repair, and recombination.

Research in the Cox lab has traditionally been focused on the repair of stalled or collapsed replication forks, primarily by the recombinational DNA repair of double strand breaks. Recent discoveries in the lab have serendipitously led us to a long-appreciated but under-explored reality: forks often do not halt at template strand lesions. Instead, DNA synthesis is aborted and reinitiated upstream, leaving the lesion behind in a postreplication gap. Repair occurs behind the fork. The generation of postreplication gaps was first detected in the 1960s. However, in the absence of the systematic attention garnered by other fork repair pathways – ensured in part by a lack of appropriate methodology – the role of postreplication gaps in genome maintenance has required periodic rediscovery. Much of our work has now been re-focused on DNA repair in postreplication gaps, and the enzymes that carry it out. The work features new enzymes and new processes. In addition, we are working on a long-term experimental evolution project to explore resistance to ionizing radiation.

There are currently two themes to the work in this laboratory: 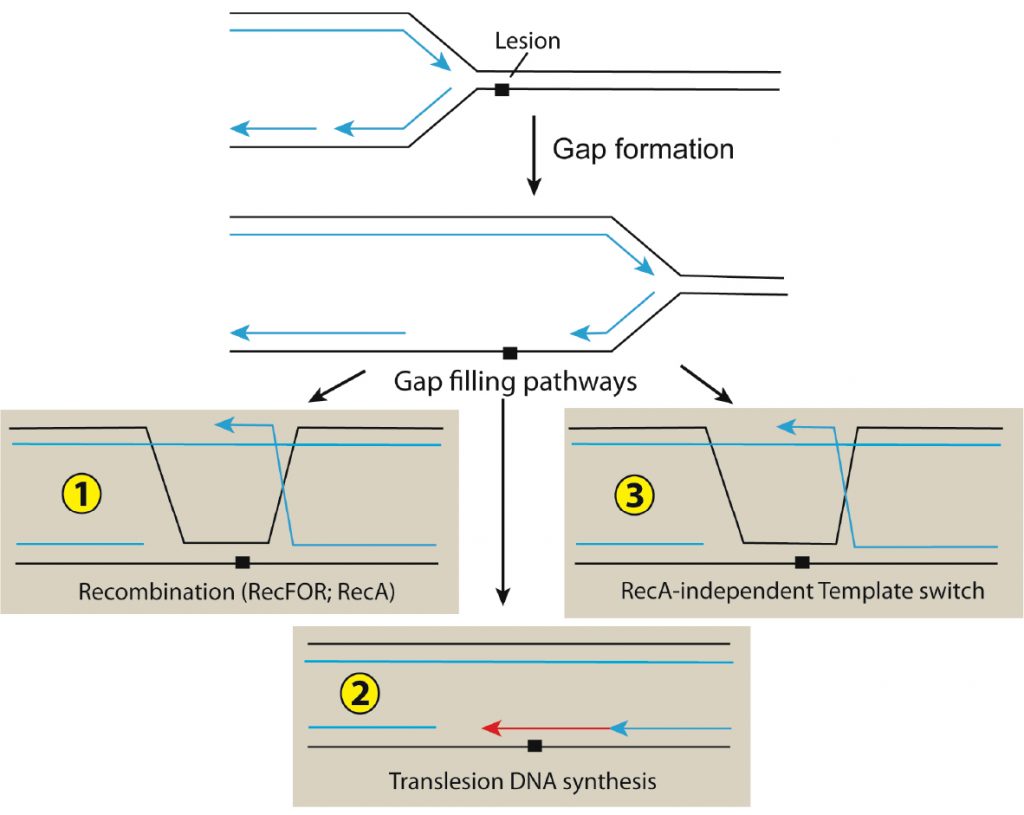 Most DNA repair pathways are predicated on the fact that DNA is double stranded. A lesion in one strand can be repaired by removing part of the damaged strand and filling in the gap by using the undamaged complementary strand as a template. However, when the lesion is in a single strand gap, there is no complementary strand to repair against; such a complement must be provided via gap filling before repair can proceed. In all organisms, there are three pathways for gap filling: (1) Recombinational gap repair. In bacteria, recombination in gaps proceeds by a pathway involving the RecFOR proteins and the RecA recombinase. (2) Template switching. This pathway is both prominent and enigmatic. It is readily detected via assays that monitor RecA-independent recombination. (3) Translesion DNA synthesis (TLS). E. coli has three TLS DNA polymerases, II, IV, and V.

To explore the broader metabolism of DNA gaps, we are studying the following enzymes, all of which are ATPases albeit of different classes:

The RecF protein. This ATPase has been characterized as part of the RecFOR pathway for loading RecA recombinase onto SSB-coated single strand DNA. However, RecF is not known to form any complexes with RecO. Instead, RecR makes complexes alternatively with RecF or RecO. The RecO and RecF complexes do not colocalize in the cell. RecF spends much time at the replication fork. RecO spends most of its time at sites distal from the fork. We are working to improve understanding of RecF’s true function.

The RarA protein. The rarA gene (rar=replication associated recombination) encodes a 447-amino-acid polypeptide with a predicted MW = 49594. RarA is part of a highly conserved family, sharing roughly 40% identity and 56-58% similarity with its Saccharomyces cerevisiae (Mgs1; Mgs=Maintainance of genome stability) and Homo sapiens (WRNIP1; WRNIP=Werner’s interacting protein) homologs. RarA also shares considerable sequence homology with the τ, δ and δ′ subunits of the DNA polymerase III clamp loader, placing RarA in the clamp loader AAA+ clade. However, unlike other clamp loader proteins, RarA functions as a tetramer rather than a pentamer. Each protomer consists of three structural domains – an N-terminal ATP binding domain, an adjacent helical lid domain, and a C-terminal tetramerization domain. Loss of this activity in any organism leads to a decline in genome stability. A few years ago, my student Asher Page, in collaboration with Jim Keck’s lab, solved the structure of this protein to provide the first structural information about this protein family. We are now actively engaged in determining the function of this protein, using approaches both in vivo and in vitro. Often found at the replication fork, we are very interested in determining what RarA is doing there.

The RadD protein. The radD gene (formerly yejH) encodes a polypeptide of 586 amino acid residues (including the N-terminal Met) with a predicted MW of 66,413. It has been implicated in DNA repair following radiation or chemical damage (128). The peptide sequence of the RadD protein includes all seven of the motifs associated with a superfamily 2 (SF2) helicase, with the motifs aligning well to E. coli SF2 helicases RecG and RecQ. RadD also exhibits significant homology to the human XPB(ERCC3). The protein binds to SSB (more-weakly than RarA) and exhibits a DNA-independent ATPase activity that is stimulated by interaction with SSB. RadD is likely involved in the resolution of branched DNA intermediates formed by template switching in gaps behind the replication fork, and perhaps other processes as well.

The Uup protein. The uup gene first attracted interest due to an observed increase in precise excision of transposons elicited by uup mutants. The uup gene encodes a 635 amino acid protein with a predicted MW of 72067. It is an ABC family ATPase in Class 2 (no transmembrane domain). UvrA protein also belongs in this class. The Uup protein has two Walker A/B domains connected by a linker and followed by a C-terminal domain. Uup appears to modulate the function of some other repair proteins, notably the RecG protein.

DNA polymerase V. DNA polymerase V is a specialized enzyme that can replicate DNA on damaged DNA templates. Induced during the bacterial SOS response, DNA polymerase V promotes mutagenic translesion synthesis (TLS). Activation of Pol V requires RecA protein at several steps, and a RecA monomer is a subunit of the active Pol V enzyme called pol V mut. Working with Myron Goodman at University of Southern California and Roger Woodgate at the NIH, we are slowly elucidating the unusual reaction cycle of this enzyme and the structural relationships between the various pol V mut subunits.

Some bacteria, like Deinococcus radiodurans, display a robust capacity to survive exposure to astonishing levels of ionizing radiation (IR), sometimes a thousand times or more than doses that would be lethal to a human. To understand the factors most important in radiation resistance, we have carried out a directed evolution experiment, generating strains of E. coli that exhibit up to 10,000 fold greater survival after exposure to 3,000 Gy of IR. The experiment is ongoing, with a goal of eventually producing E. coli strains with levels of IR resistance that exceed that of Deinococcus. With this project, we are broadly exploring the molecular basis of extreme resistance to IR. Contributing mutations in genes involved in DNA repair, remediation of reactive oxygen species, central metabolism, and cell wall biosynthesis have all be implicated in the overall phenotype. The work involves extensive use of genomic, metabolomic, and proteomic approaches.

Our work is greatly enhanced by collaborations. Prominent collaborators at present include Jim Keck in the Department of Biomolecular Chemistry here at UW (structural biology and the enzymology of replication restart), Myron Goodman at the University of Southern California (translesion DNA synthesis), Roger Woodgate at NIH/NICHD (translesion DNA synthesis), Antoine van Oijen, Andrew Robinson, and Harshad Ghodke at the University of Wollongong, Wollongong, Australia (single molecule approaches to DNA metabolism), and Sue Lovett at Brandeis University (Genetics of DNA metabolism in bacteria).